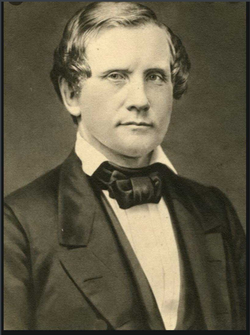 This story is from the book “Celebrated Criminal Cases of America” by Thomas Duke. It is a work that is in the public domain and is considered to be the first True Crime book of its type. We are presenting the story here below and then we dive further into the story by doing our own research to see what is truth and what is fiction.

Alexander Crittenden was born in Lexington, Ky., on January 14, 1816. Andrew Jackson was a close friend of his family, and it was through Jackson’s influence that Alexander was sent to West Point. He graduated from this military college with Sherman and remained in the army for about one year. At the age of twenty-two, he married and went to Texas, where he was admitted to the bar. In 1852 he came to San Francisco and associated himself with S. M. Wilson. Under the firm name of Crittenden & Wilson, they became one of the most prominent law firms in San Francisco.

Laura D. Fair was a native of Mississippi, and at the age of sixteen, she married a man named Stone, who died about one year afterward. She then married a Thomas Gracien of New Orleans, but divorce was obtained six months afterward. In 1859 she married Colonel W. B. Fair, who was at that time Sheriff of Shasta County, California, but who subsequently moved to San Francisco with his wife. Owing to family troubles he committed suicide in December 1861. After the death of her husband, Mrs. Fair conducted the Tahoe House in Virginia City.

During the war, her sympathies were with the South to such an extent that she took a shot at a Northern soldier, but as her aim was very bad she was never punished for her action. On another occasion, she shot a man at the Russ House in San Francisco, whom she claimed had made a disparaging remark concerning her, but again her aim was bad and again she escaped prosecution.

Mrs. Fair had some ability as an actress and appeared at the Metropolitan Theatre in Sacramento on March 5, 1863, as Lady Teazle in the “School for Scandal.” In August 1870, a young man named Jesse Snyder married her, but on October 8 of the same year, they were divorced.

In September 1870, Crittenden sent his wife and seven children East for a pleasure trip, and on the afternoon of November 3, he went to Oakland to greet them on their return. He met his family at the Oakland pier and accompanied them aboard the ferry El Capitan. From the time of the family reunion, Mr. Crittenden’s son, Parker, noticed a woman dressed in black and heavily veiled, who seemed to be watching their actions very closely, and when the family was seated on the boat she hurried toward them and, suddenly whipping out a pistol, shot Crittenden Senior in the chest. The wounded man fell unconscious and the woman hurried away and took a seat, but Captain Kentzel of the Harbor Police, who was on the boat at the time, disarmed her and placed her under arrest. It was subsequently learned that she was Mrs. Laura D. Fair. Immediately after being arrested, she began to act in a peculiar manner, and when a stimulant was handed to her in a glass of water, she bit a piece out of the glass.

At 6 p. m., on November 5, Crittenden died, and on the day of his funeral, the Federal, State and municipal courts adjourned. His funeral was one of the largest ever held in San Francisco up to that time.

Mrs. Fair was charged with murder, and during the trial, which occurred in San Francisco, she testified that she and Crittenden had been intimate for seven years past. The defense offered was that Crittenden’s perfidities had wrought havoc with Mrs. Fair’s mind and that she was in a blind frenzy when she shot him.

On July 11 the Supreme Court granted her a stay of execution and finally granted her a new trial, at which she was acquitted, because of her attorney’s plea to the jury that the defendant was a victim of emotional insanity.

For many years after her acquittal, Mrs. Fair made a living as a book agent in San Francisco.

I always find it interesting to see these cases written with so little information and then I start doing my own research and I find a ton more redly available. It makes me wonder if Thomas Duke was trying to fit as many cases into this book as possible and didn’t want it to be ten thousand pages long. This case was very interesting to read, to say the least.

The affair between Alexander Crittenden and Laura Fair was the real deal. When they got together, Laura had no idea he was married. This quickly changed. When she found out, she confronted Alexander about it and he told her he would get a divorce. Of course, he never did. This is what led to the planning of the murder in the first place.

The other interesting thing that I found was an odd story about Laura’s time in jail and prison. You see, she absolutely refused to eat any of the food offered to her. Instead, she had food brought in twice a day. At first, she had several visitors, and getting food in was no problem. But then over time, it was just her Mother and Daughter coming and they would have to take turns bringing her food.

Throughout the trials and appeals, Laura’s name was dragged through the mud. She was tried in court and in the court of public opinion. But, just before her appeal, the newspapers were taking this a step further. They were trying to suggest that something strange was going on with her and her case. Between her sentencing and retrial, several people had died who were connected to the case. The Judge died, the victim’s son died and Laura’s own mother was deathly ill. Even though she was behind bars, the way the articles were written, you would have thought she was being let out at night to gather more victims.

Her family had to also endure the newspaper’s onslaught. Laura’s brother was going through a divorce and it made national news, just because his sister was a killer.

The only thing that I found really odd about this case was the retrial. They acquitted her because of emotional insanity. But it was quite evident that she planned this whole thing. She knew Alexander was going to be on that boat, she disguised herself so that no one would recognize her and she brought a gun to kill him with. This wasn’t a spur of a moment kind of blind rage thing, this was a properly planned murder. I don’t buy the whole emotional insanity thing.

Let me know what you think in the comment section below. Thank you all for joining me and I will see you all next time.

Refused to eat jail food, was treated like a demon.