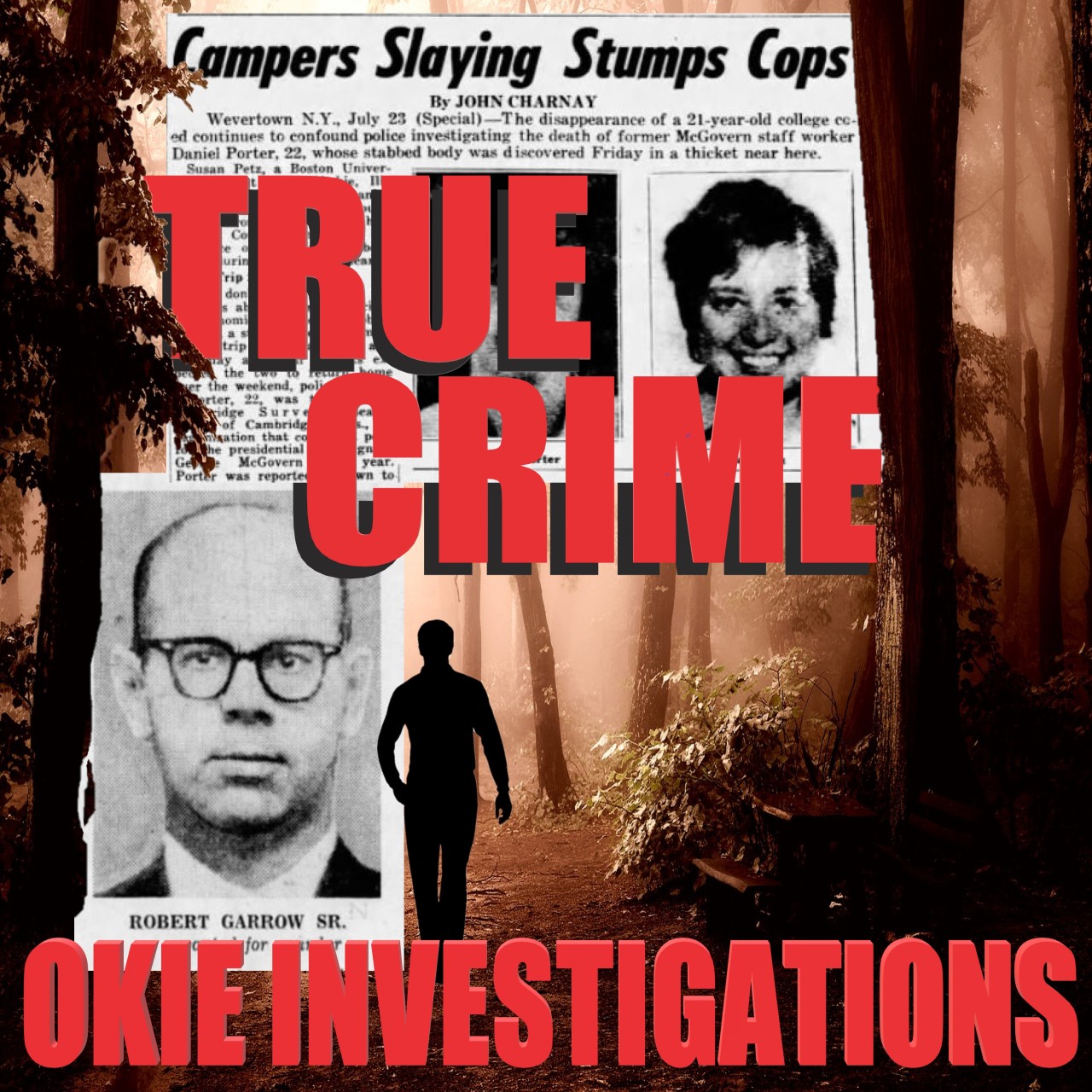 To recap the last two episodes, Robert Garrow is the main suspect in the spree killings days earlier in the Adirondack mountains. His car was spotted, and he fled into the woods. The police searched for him for 10 days before he was aided by his sister and nephew. Robert attempted to run back into the woods but was shot in the process.

August 9th, 1973. Authorities rushed Robert to the hospital. He had been shot several times and had been severely wounded in his attempt to again flee from justice. He was taken to the local hospital, and doctors could stabilize Robert and keep him alive. As doctors treated Roberts wounds, detectives were patiently waiting for a chance to question him.

You see, at this time, Susan Petz was still missing. They didn’t know if there was a chance that she might still be alive, just held captive somewhere. The only clues they had been working with at this point was the evidence located in Roberts’s car. They found several hairs that might be Susan’s. This case predated DNA testing, so they would have to compare other things about the hair to see if it matched Susans.

Finally, just 24 hours after he was caught and brought to the hospital, Detectives have the chance to question Robert Garrow. But this proved to be almost as difficult as searching for him in the thick woods. You see, Robert was acting on the advice of his attorneys and refused to answer any of their questions. Police Senior Investigator Henry McCabe found it infuriating that they could not get anywhere with the questioning but expected this to happen. Anytime they tried to question him about the murders or Susan’s disappearance, Robert would close his eyes and pretend he was somewhere else.

While all of this was going on, Robert’s attorneys were arguing in court that there was no chance for Robert to get a fair trial. Because of the extensive news about this case, it would be nearly impossible to find a Jury who doesn’t already know about Robert’s past crimes. They feared that he would be judged unfairly in this case.

This was a real problem for the defense in this case. You see, to receive a fair trial, Robert will need to only be tried for the crimes he is being accused of. Which is the murder of Phillip Dombelwski and not the pending Rape charges Robert was fleeing from in the first place. It is a fine line for the Judge to decide what is fair to be told to the jury and what is not.

On December 9th, 1973, a body was found roughly one mile from the spot where Robert Garrow was captured. At first, the police believed it to be male because the body was severely decomposed. But after examination, it was found to be female, not only that it was the missing woman, Susan Petz. Her body was discovered in an abandoned mineshaft. Apparently shoved in there to hide her body from anyone passing nearby.

As the days and weeks go by, Robert slowly heals from his wounds. He has a setback when he contracts phenomena, but he soon recovers from that as well. As he is encouraged to get up and move around. Robert starts to complain that he is now partially paralyzed. As doctors look further into this, they can find no reason for this to be happening. More tests are done, and Doctors continue to see no reason for the paralysis. Nevertheless, the trial goes on.

After weeks of jury selection, the trial began on June 10th, 1974. The defense wanted to start things off with the most potent witnesses they had, Nicholas Fiorilla and Carol Ann. They both had different perspectives of the day when Phillip Dombelwski was brutally murdered. Nicholas was just returning from the fishing trip when he found Robert Garrows ordering Carol and David out of the tent. Carol testified that she was tied up to a tree and that when Phillip and Robert were just out of sight, she heard Phillip let out a scream, which was followed by gurgling vomiting noises.

The follow-up by the defense was to try and get the witnesses to admit that Robert appeared to be a man out of control, that he was perhaps not acting on his own free will. This insanity plea would be their strategy going forward. They can’t really argue that their client did not commit the murder, but they can say that he was not in his right mind when it happened.

Over the next few days, the prosecution brought in Dr. Jack Davies, who testified to the stabbing. He stated that each stab wound was not a killing blow. It was likely that Phillip suffered a great deal when he was left to die. They then showed the jury a photo of Phillip’s dead body. They also brought in Betty Baker, who testified that Robert Garrow visited her Gas station when he was going to his sister’s house. Roberts’s sister testified that Robert came to her house and watched news reports about his flight from justice. He gleefully talked about how he had one-upped them by getting a stolen car. She denied that he admitted to any killing while at her house but that Robert knew he was on the run from the law.

When the prosecution rested, the defense threw their hail mary right away. They called Robert Garrow to the stand. First off, Robert didn’t hold back when he brought up recent crimes that he was accused of. He testified that he was mentally having a breakdown. He had stopped on the side of the road and was trying to think and clear his head. That’s when a man and a woman approached him. He stated that he remembered getting into an argument with the man, and they started fighting. They rolled down a hill, and he pulled his knife and hit the man with it over and over. He then forced the woman to go with him. For three days, they camped together. He stated that they slept together several times, and then on the third day, she tried to grab his knife, he took it from her and stabbed her. She died, and he decided to hide her body in a nearby mineshaft.

It was then, he admitted to another unsolved murder. At the beginning of this story, we spoke about a missing 16-year-old girl named Alicia Hauck. Robert Garrow testified that while driving down the road, he spotted her. He took her and killed her.

He then described the day he came across the four campers in the Adirondacks. He stated he was bewildered and panicked about what was going on. He didn’t want to hurt them, but when he tried to tie them all up, he resisted, and he stabbed Phillip to make him stop.

But what was probably the most historical admission during this testimony was that he told his attorneys about these murders after he was captured. They were able to go out and verify that those bodies were indeed there. They took photos of the bodies, which they later state were destroyed so that no one else was to find them. This outraged the state’s prosecution and the public. These attorneys knew where the two bodies were and told no one. But the attorneys cited that they were told this information was under client and attorney privilege and could not disclose it. This would be argued further after the trial was over and was sidelined for now.

Robert also testified that his upbringing was not typical for a child in any sense. His father gave him to a farmer when he was seven years old. For the following years, his entire life consisted of farming. He had no friends, and when he was a teenager, he explored sexual fantasies with the livestock. When he became an adult, he left the farm but only found work on another farm. He soon began to have sex with their livestock. It was around that time, he met his wife and had a child with her. He would go on walks at night, but it was not for exercise. It was to look for victims to rape. He targeted young girls, and that’s when he was caught and sent to prison the first time. After his release, he began looking for victims once again.

When the case was handed over to the jury, they decided to either find him innocent due to insanity or guilty. They believe him to be sane during the murders and found Robert Garrow Guilty for killing Phillip Dombelwski. The Judge sentenced Robert to a prison sentence of 25 years to life.

After the trial, they then explored if the attorneys did anything wrong by withholding the location of the two missing women. One attorney was indicted for his actions, but the case was quickly thrown out. At this time, client-attorney privilege was not standard in every state. This case set the standard for attorneys to go by. This is why this case is still taught in law schools today.

Robert would continue to fain his injuries to get him reassigned to a better prison. When the first opportunity arose in 1978, he escaped after his son snuck a gun to him in prison. Robert was seen climbing fences that would have been impossible if he had been injured. There was a large wooded area nearby, and Robert was again able to escape with no trace. The search for him this time was only for one day. When he was spotted, the officer shot and killed Robert when he refused to give up.